Home Country China Strong Halal Opportunities in Restive Xinjiang
Facebook
Twitter
Pinterest
WhatsApp
Linkedin
Email
Print
LINE
Viber
During a recent trip to Xinjiang Uyghur Autonomous Region in December 2013, I was amazed to find a number of Malaysian FMCG products in Xinjiang. Among the Malaysian products found in one Uyghur-owned grocery store in Turpan were ACE soft drinks, Alicafe RTD coffee drink and Drinho Asian drinks. Also popular in Xinjiang are Turkish products including from the leading brand Ülker.
Despite a growing number of halal-certified products from other regions in China, it seems Uyghur consumers have shown stronger confidence in the halal certification issued by Malaysian and Turkish authorities. The distrust shown on the certification issued by China’s state-run Islamic body by Muslim consumers has resulted in some mainland companies mislabeling their products as coming from countries like Malaysia, which has a strict halal certification regime, in a bid to improve their market access into Xinjiang, according to Radio Free Asia. Such practices will be detrimental to Malaysian and Turkish exporters in the long run unless steps are taken to eradicate such practices.
“One company contacted by RFA Uyghur Service, Tianren International Ltd., admitted it had been producing food products domestically and mislabeling them as certified halal goods from Malaysia, a predominantly Muslim country” link
In addition to the stricter halal certification, Malaysia and Turkey are perceived as friendlier towards the Uyghur communities due to their shared Islamic heritage.With the ethnic tension and violence still on going in Xinjiang, the consumption of products imported from Muslim countries can be interpreted as an act of defiance among the Uyghur communities against ethnic Han rule. Such sentiment bodes well for exporters from Malaysia and Turkey to tap into the Xinjiang market with about 9.5mn Uyghur consumers. 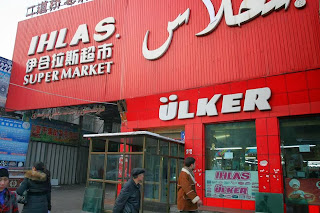 Ülker graces the entrance of Ihlas Supermarket in Urumqi.

Dunkin’ Donuts Sets its Sight on Shopee to enhance its E-Commerce...

New Jelly B drinkable konjac jelly with less than 10 calories...