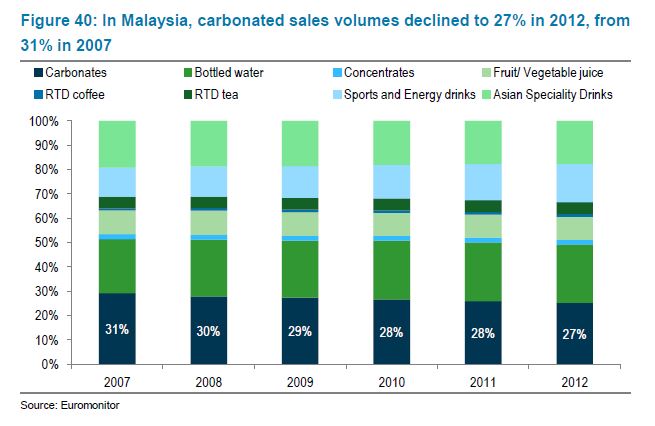 The achievement of Mountain Dew is interesting given the continued shrinking of the share of ‘unhealthy’ carbonated soft drinks in the overall soft drinks market, down 4 percentage points within six years to 27%, according to Euromonitor.

The key to Mountain Dew’s success is its positioning as a drink for the youth, a consumer group that is still less preoccupied about their health than on instant indulgence.What attracts the youth to Mountain Dew is the vibrancy of the drink and its unique names eg Live Wire (Zesty orange flavour) and Pitch Black (citrus grape flavour).

Coca-Cola is rather boring lately. The two innovations – collectible Coca-Cola cans with unique Malaysian words and beverages in returnable glass bottles (RGB) – have gone through the back of the mind of consumers. What it needs now is to come up with a new marketing or borrow some of the unique marketing tricks from other countries such as the Coca-Coca lyric bottles in China so that it can continue to engage with its consumers.

Tan Heng Hong - 19th January 2022 0
The Malaysian carbonated soft drink brand Hausboom is back with a new collaboration with Garrett Popcorn Malaysia. The latest partnership saw Hausboom and the...

Greek Yogurt Aims for the Up Market