Malaysian companies are making big bucks exporting soy milk drink (susu kedelai) to Indonesia. In the past three years (2012-2014), the cumulative soy milk drink export from Malaysia reached USD 10.55 million, growing at a compound annual growth rate (CAGR) of 78.9%, according to the Indonesia Ministry of Industry.

Soy milk drink is traditionally consumed in Indonesia and is sold by street vendors. Modern urban consumers are looking for ready-to-drink soy milk in modern packaging as a healthier alternative to other sugary drink. Soy milk is suitable for people with lactose intolerance and is known as a good source of protein. It also does not contain cholesterol.

Source of soy milk by import

Malaysia remains the biggest exporter of soy milk drink to Indonesia, accounting for nearly 80% of value and the highest growth, followed by Thailand. South Korean soy milk drinks are usually priced at a premium. 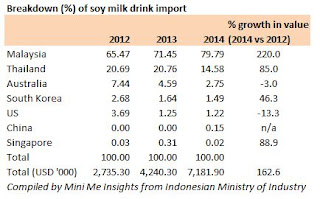 Made-in-Malaysia soy milk drink Yeo’s, Naraya and Soy Up are cheaper on a per litre basis compared to Soylicious and Thailand’s V-Soy. This shows the competitive nature of Malaysian soy milk drink. In Malaysia, the soy milk drink industry, usually categorised under Asian drink, is well established and has the volume to produce products at a lower price. 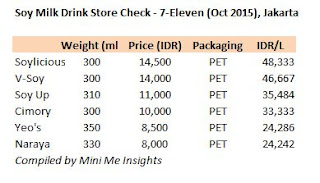