It seems KFC, famous for its fried chicken, is looking at ways to broaden the appeal of its food in Asia with seemingly healthier food that is grilled, not fried. This comes as rival McDonald’s has started introducing vegetarian options in North America with the new Mediterranean Veggie and Santa Fe Veggie wraps. 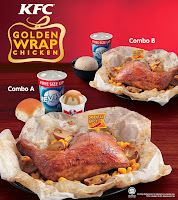 In Malaysia, KFC rolled out the Golden Wrap chicken in January 2013. The chicken “consists of kam heong marinated quarter-cut chicken on a bed of sweet corn kernels and sliced button mushrooms all wrapped in a special paper, then deep-fried to perfection. Kam heong, which means golden fragrance in Cantonese, blends spices with pepper.” (NST: 25 January 2013) To me, the picture seems to suggest the chicken is grilled or baked. The use of special wrapping paper in the preparation of chicken is usually used in the making of beggar’s chicken, a Chinese delicacy.

In Indonesia, it is called grilled chicken.  Launched in March 2013, the grilled chicken is prepared using New Orleans Marinade. In South Korea, KFC launched a similar grilled option in August 2013. All of these products are offered on a limited basis. I haven’t tried these limited-edition KFC grilled chicken as I still find the original KFC fried chicken the best. KFC = fried chicken.

KFC Bloody Gravy is back for Halloween

Tan Heng Hong - 10th November 2019 0
Vitagen, one of the leading cultured milk drinks in Malaysia, has added a new distribution channel. Riding on the immensely popular free messaging and...

Tan Heng Hong - 10th April 2020 0
Singapore, 9 April 2020 – Following the recent challenges that have been felt across the Singapore F&B scene, Junior is keeping spirits high with the...