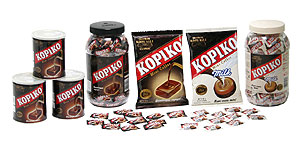 PT Mayora Indah Tbk (MYOR), known for its Kopiko coffee candy, is one of Indonesia’s biggest food companies. The company makes everything from coffee and cereal to candy and biscuits.  Its revenue grew at a CAGR of 20.6% between 2008 and 2013, operating income up by a CAGR of 24.8% and net income rose by a CAGR of 32.1% over the six-year period.
2011 was a terrible year for MYOR due to high commodities prices. During the first half of 2011, the cost of palm oil, sugar, wheat and coffee escalated. To keep its prices competitive, the company chose to absorb most of the raw material price hike to maintain the sales momentum. Nonetheless, COGS grew faster than revenue growth, which resulted in the decline in overall profitability. In 2012, the company imported 40% of its raw materials.

The gearing ratio fell to 51.09% in 2013 from 79.77% in 2012 due to the increase in cash and cash equivalent, while total borrowing remained unchanged at IDR3.7 to IDR 3.8 trillion with most of them non-current liabilities with a repayment period of longer than one year. Interest expense has been manageable, thanks to rising sales. MYOR has been cutting back on capex to reduce its gearing level. Most of the expansion was made in 2012, which will be adequate for future needs.
Sales breakdown by geography

MYOR has been aggressively expanding its global footprint. The export market will be the key driver for MYOR going forward. In Malaysia, MYOR has become very active in the market with innovative products such as the low acid coffee Kopiko LA Coffee and its biscuit ranges such as Astick and Slai O’lai. Malaysia is ripe for MYOR’s Energen Cereal as the country has a strong culture of drinking 3-in-1 cereals.

In China, its Astick stick biscuit has good shelf presence in the leading trade channels. As for the Kopiko candy, it is well known globally.

Conclusion
The growing export business and the focus on food processing put the company in a good position.  The key risks are commodities prices and debt-fuelled expansion. The focus on one-off items such as gains on forex may not be sustainable.

Disclaimer: The author is vested in MYOR

Tan Heng Hong - 13th April 2021 0
In Malaysia, Mister Potato is back with a Ramadan limited edition flavour. The Purple Sweet Potato (ubi keledek) crisps are unlike any as they...

CÉ LA VI Singapore Welcomes the Year of the Rat with...