This image taken from a Chinese online retailer represents a sentiment, which dairy exporters hope, is shared by most mainland Chinese consumers. On top of the pyramid is imported fresh milk. These air flown fresh liquid milk with a shelf life of only up to 21 days is known in this marketing material as “diamond.”

Ranked one ladder behind diamond is “gold”, which is represented by domestic made-in-China yogurt. Next comes domestic fresh liquid milk, dubbed “silver”, followed by “bronze” in the form of milk powder and bottom of the pyramid is “iron” or UHT milk. 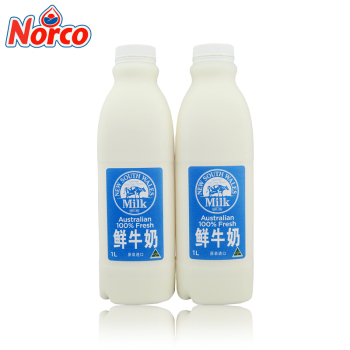 The Australian media has hailed the recent fast tracking of milk export to China as a breakthrough. The first to achieve this is the northern NSW dairy co-operative Norco, which has received Chinese government approval to fast track quarantine procedures. In normal circumstances, the export lead time for fresh milk typically takes 14 to 21 days. Now, it will only take seven days for fresh Australian pasteurised milk to reach Chinese tables.

Following on the heels of Norco is New Zealand’s A2 Milk Company Limited. The company has started selling fresh pasteurised milk in China. The fresh milk, air flown from Australia, is sold through one of China’s leading internet retailers JD.com, which recently listed on the NASDAQ.

The key points used in the marketing of A2 fresh milk in China are:
1.) Directly air flown from Australia
2.) Uninterrupted cold chain to ensure freshness
3.) a2 is the market leader in Australia’s high-end milk market
4.) Naturally rich in the A2 type of protein
5.) Ideal for 85% of Chinese who are lactose intolerant
6.) Pasteurised is healthier than UHT milk

A2 Milk is using fresh milk to temporarily bridge the suspension of sale of its Platinum brand infant formula in China due to regulatory changes. This comes as Synlait Milk, its main partner, has yet to receive Chinese manufacturer registration to export infant milk powder to the country. The first shipment started in November 2014 and the last shipment was made in April 2014. Starting 1 May 2014, only foreign infant milk powder producers registered in China can export their products to China. A2 announced on 22 July 2014 that it has received regulatory approvals from China to resume the export of its Platinum brand infant formula to China.

A2 Milk posted a China operating EBITDA of negative NZD 3.3 million for the 12 months ending June 2014. According to the company’s full year financial result presentation slides, the “priority is to build UHT sales and fresh milk into China and other Asian markets in parallel” as infant milk powder sales in China has halted. Now the key weapons in the arsenal are UHT and fresh milk. For fresh milk, the company has launched a trial with about 10,000 litres flown to China in early August 2014.

I am not sure if A2 wants to go for the bottom of the pyramid with UHT milk but if it is desperate to make up for the losses in China, then “iron” grade UHT milk option will have to be exercised. At least it won’t be “iron” per se but something between “bronze” and “iron” since A2 is still an imported Australian milk.

Yupi and Bakeground launch cake with gummy bears as part of...