Coke Zero can now be seen everywhere. It was officially launched in Malaysia at the end of January 2015 but as a consumer, I was not aware about it until Coca-Cola ran a five-day campaign at 7-Eleven on 25-29 March 2015. The campaign saw a can of Coke Zero selling  for only RM 1! The irresistible price encourages consumers to try Coke Zero for themselves. 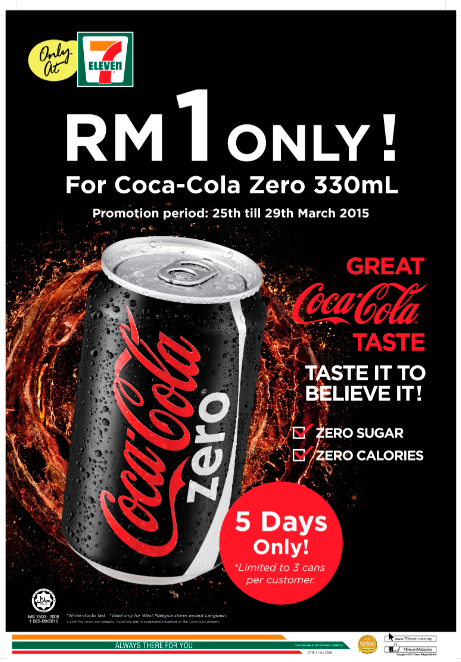 Afterwards, I started noticing Coke Zero advertisement on the free daily newspaper The Sun. The usual cinema I go to has started offering Coke Zero. Even though I rarely watch free-to-air TV, I still managed to catch a glimpse of the Coke Zero TV commercial on the TV. The TV commercial conveys the message that Coke Zero tastes very much like the normal Coca-Cola minus the sugar and calories.

The Coke Zero launch has surely served its purpose of creating awareness through multiple touchpoints – TV, newspaper and convenience store as well as social media. The campaign encourages people to try Coke Zero and effectively drives home the message Coca-Cola Zero does taste as great as Coca-Cola without the sugar and calories.

And by the way, according to the Rakyatpost.com, Coke Zero is supposed to be produced locally in Coca-Cola Malaysia’s factory in Bandar Enstek. However, if you look closely at the packaging, you will notice the Coke Zero currently selling in Malaysia is actually made in Singapore.