In contrast to Wonda Coffee, Nescafe’s ad on 1 October 2015 focused on the ‘world’s most-love’ coffee credential to show you will not be wrong by going for a coffee that is loved by consumers around the world. Nescafe opted for the official 1 October International Coffee Day, while Wonda went for the unofficial 29 September. However, Nescafe’s promotion did not mention about the International Coffee Day.

The promotion was only limited to RM 5.95 for a 6-pack Nescafe Original, Latte and Mocha and no mentioning of the participating outlets on the print ad. In actual fact, the promotion was available only at “TESCO, GIANT, AEON, AEON BIG, BILLION, ECONSAVE, MYDIN & 99 Speedmart nationwide from 2nd Oct to 4th October.”

One Facebook reader left a note on Nescafe Malaysia page saying “ Is this a marketing gimmick? Why no details on participative outlet? Nescafe should learn from WONDA…no hidden agenda, all info on the newspaper.”

Another Facebook reader said why staff at the 99Speedmart and Mydin outlets was not aware of the promotion.

The Nescafe promotion is only limited to three flavours – mocha, original and latte but the advertisement shows 5 different flavours, which misled consumers into believing the promotion covered all five flavours.

However, the response was overwhelming with most of the RM 5.95 pack already been sold, according to  messages left on Facebook.

Conclusion as of 5 Oct 2015
The marketing by Nescafe is more old-school with focus on the mainstream retailers using an irresistible price of RM 5.95 for a pack of 6 cans. There were some confusion on the participating outlets and products that were part of the offer. [See updated information below]

The battle has not ended for Nescafe 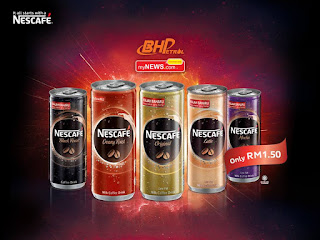 Nescafe promotion goes multi-dimension. Nescafe is available for a price of RM1.50 per can at myNEWS. com and BHPetromarts from 9th – 11th October 2015

At Petron and Nestle, Nescafe and KitKat Green Tea is available at a ‘Special Price.’ At Petronas, you can win prizes by buying RM5 worth of Nescafe.

Tan Heng Hong - 29th September 2021 0
Doritos in Thailand has partnered with HeartRocker (HRK), one of the leading social media influencers in the gaming and esport category. The PepsiCo snack...