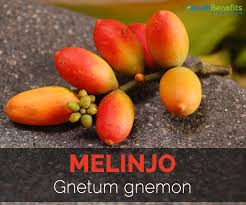 Gnetum gnemon, also known in Indonesia as melinjo, is native to Indonesia and other southeast Asian countries (Malaysia and the Philippines) as well as in the western Pacific Ocean islands and in India (Assam and Mizoram). In Indonesia, melinjo is used to make the traditional snack emping, a bite-size snack kripik cracker, which has a slight bitter taste. Melinjo can also be added into vegetable dishes or fried. The H2 Genetron is Gnetum gnemon flour is made from selected melinjo seeds that come from Yogyakarta. The flour is good for making cakes, biscuits and bread. Based on a serving size of 100g, the flour contains 520mg of potassium, 25mg of sodium, 71g of total carbohydrate, 17g of dietary fiber, 13g of protein and 2g of total fat. The magnesium meets 25% of daily needs based on a 2,150 calorie diet, while phosphor meets 30% of the daily needs.

This product is aimed at the local as well as the Japanese market as there is a growing awareness about its beneficial properties especially in Japan.

The H2 Genetron is manufactured by PT Sukses Abadi Farmindo in Tangerang.

Indonesian companies are increasingly recognising and commercisalising health food and supplement based on local food ingredients, targeting for both the domestic and international markets.

*Image of emping from Emping Melinjo Sidoarjo; product photos taken by the author at TEI 2017

Tan Heng Hong - 3rd May 2017 0
Fitbar, the leading snack bar from PT Kalbe Farma Tbk, was upgraded to multigrain in February 2017 with the addition of oats, whole wheat...