Revive, the isotonic drink of Permanis, is back again with its third edition of its RevUp My School campaign to boost sales during the Chinese New Year festive season. Similar to the last campaign, RM 0.30 will be donated to selected Chinese primary schools with every carton of Revive and Pepsi 24-can pack sold.
Chinese education is dear to the heart of the Chinese community in Malaysia. Due to the lack of access to government funding, Chinese educators face an uphill task in getting the resources to improve school infrastructure to meet rising demand from the both Chinese and Malay school goers. Some Malay parents send their children to Chinese primary school as Chinese schools are known to be strong in science and maths.

Revive has always been struggling to compete with F&N’s 100PLUS in the isotonic category let alone toppling 100PLUS as the preferred carbonated beverage choice during Chinese New Year. Isotonic drink is popularly consumed during Chinese New Year because its is perceived to be less harmful to health than Coke and Pepsi.

Carlsberg’s long-running “Top Ten Charity Campaign,” (Top Ten) which supports Chinese schools through charity show concerts, offers Revive an example of a successful marketing, a means to strike deep into the heart of the Chinese consumers by supporting what the Chinese consumers cared the most – education. At the end of 2011, Carlsberg Top Ten campaign raised an accumulated RM 369 million for about 588 Chinese schools and institutions over the past 25 years.

Unlike Carlsberg, Revive has its share of controversy as Permanis has been linked to its controversial politician-cum-businessman Datuk Johari Bin Abdul Ghani. He is the group managing director of C.I. Holdings who sold Permanis to the Japanese beverage giant Asahi Group in 2011. Johari is also the UMNO division chairman for Titiwangsa and is known to have made the remark in 2011 that he “did not need Chinese and Indians to win the Titiwangsa seat.”

The call to boycott Permanis products, erroneously linked to Johari, has been making rounds on the Internet.  Therefore, it is not a surprise to see similar comments on Revive Facebook fan page calling for the boycott of Revive during the 2013 RevUp My School campaign.

In response, Permanis tried to straighten the facts by saying that it is owned by a Japanese firm and the company practices multiculturalism. 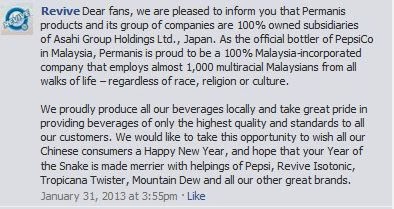 Boycotts linked to race, religion and political allegiance is not uncommon in Malaysia, a country that still practices institutional racism.

The same thing happened to Gardenia bread in 2012 when some netizens called for the boycott of Gardenia bread. This follows claims that Gardenia has been directed by Bernas, owned by UMNO crony Syed Mokhtar Albukhary’s Tradewind group, to stop buying flour from Hong Kong-based Malaysian tycoon Robert Kuok’s Malayan Flour Mills. Instead of buying Gardenia, the campaign encouraged consumers to purchase Robert Kuok’s Massimo bread that entered the market recently.

The latest case being calls by Muslim groups and pro-UMNO bloggers to boycott products made by the Chinese community, a retaliatory effort against the Chinese community for their overwhelming support for the opposition during the 2013 General Election. Among the products to be boycotted include Massimo bread, the OldTown White Coffee chain and Cap Sauh wheat flour. The government’s response was “Putrajaya did not approve of the boycott, but could not prevent those who wished to do so.”

To move forward, the government needs to have a change in policy and stop the legacy pro-Bumiputera affirmative policies for the betterment of the country, a wishful thinking under the current administration.

Exsport Collaborates with Yupi to Create Bags That Inspired by Gummies