The competitive landscape of the spoonable yogurt market in Indonesia has changed following the departure of the Danone Activia range in March/April 2014. Here is a quick update on the market.

The current market players are:

Here are a series of images taken in 2013 and 2015. You can see how the shelf space for Activia and Milkuat was taken over by the other players. Comparing 2013 and 2015, Elle & Vire now has a bigger self presence.

Elle & Vire remains the most expensive of the three, followed by Yummy and Biokul. 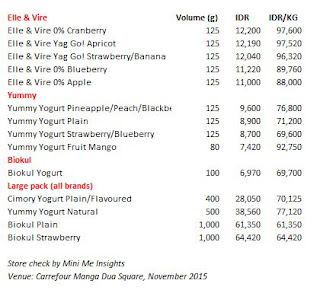 Lazada Takes Shoppertainment to the Next Level this 11.11, kicks off Biggest One-Day Sale for Malaysian shoppers

Explosive mix of coffee with essence of chicken

Tan Heng Hong - 23rd February 2020 0
Sappe, the Thai functional drink company, has launched what is known as Thailand's first coffee drink with essence of chicken. The combination of essence...