Nestle (Malaysia) Berhad Managing Director Alois Hofbauer gave a talk at The Star’s PowerTalk in February 2016. Below are some interesting facts from the session. 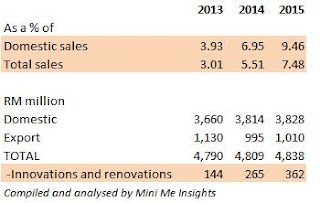 The company has to innovate more to capture the growing share of the F&B market given the subdued consumer sentiment  According to Nestle citing Nielsen audit data, the Swiss F&B giant has captured a growing share of the local F&B market. Assuming the market share covers only segments Nestle are operating in excluding categories like bottled water, carbonated soft drinks etc, we now know how big is the F&B universe Nestle is active in. The caveat is the we assume everything is sold in retail and value should be higher sinceNestle (M) domestic revenue is calculated at ex-factory price, not at retail price. But it does give you a sense where the market is heading.

Poor consumer confidence due to depressed oil prices, the removal of more subsidies and the 6% GST have impacted consumer spending in 2015 with F&B sales down by around 8% in 2015. This compared with a positive 3% growth in 2014. The market share gain was made in an environment where overall sales were failing, which shows Nestle is coping well with the challenges.

Also mentioned by Alois during the talk was the growth in petromart and convenience store. [This blog will be focusing more on covering stories about these two distribution channels going forward.] The company is working to innovate to produce more convenient and portable products such as Milo Nutri G to target on-the-go consumption occasions. F&N was seen already doing product sampling for its new Ranger energy drink at the Petron petrol station last week. Petromart is becoming an important retail channel as more time is being spent on the road.

One thing missing in the latest Nestle (M) 2016 analysts briefing is the absence of revenue breakdown by category. Do hope Nestle will bring it back this year.