Est cola first appeared in Malaysia six months ago in 2015. How has the new cola brand performed so far?

According to the latest Nielsen data from F&N Ltd presentation slide, F&N and 100Plus collectively accounted for 50% of the Malaysian carbonated soft drinks and isotonic drink market share by volume moving annual total (MAT) March 2015. This does not include Est.

The good news is Thai Drinks president Vivek Chhabra revealed in an interview with The Nation that the market share of Est in Malaysia was between 4-5% of the carbonated soft drink market. He did not mention whether he was referring to volume or value. However, one extra piece of valuable information he gave was the “est brand in Malaysia is worth only 3% of sales of the product in Thailand.” This allows us to do some calculation. 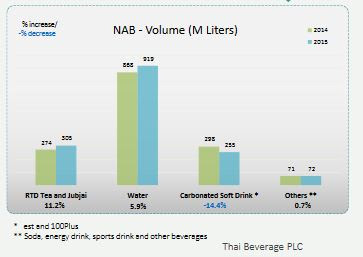 Assuming he was referring to volume, the total sales volume of Est in Malaysia should amount to about 7.65 million litres. In 2015, Thai Beverage’ carbonated soft drink sales in Thailand stood at 255 million litres. Assuming most of the sales is in the 500ml format and the retail price is RM 2.00 per bottle, according to a store check on Tesco online, the total sales of Est in 2015 would amount to around RM 15.3 million. As a comparison, Malaysia-listed Fraser & Neave Holdings Bhd reported RM 1.51 billion in sales for soft drinks for the 12 months ended 30 September 2015. This shows how tiny Est sales are at the moment.

My Cola captured 6% of market share in 2013 within months after it was launched, according to F&N annual report. With Est commanding a 4-5% share, this means Est is just taking back the shares of My Cola. The reason F&N launched Est in the first place is to replace My Cola. To win in the marketplace, Est has to be different. It has to go for the low-price route (AJE’s Big Cola). Low price means significantly low price compared with Coca-Cola and Pepsi targeting segments that are sensitive to price to win the volume game.

The Most Visited E-commerce Merchants in Malaysia

Clean label and antimicrobial resistance force rethink of antibiotic use