Mamee Double-Decker is betting on better-for-you crisps with the introduction of Mister Potato Sweet Potato in Malaysia. This follows the product’s earlier launch in Thailand in September 2016.

Mister Potato Sweet Potato Crisp is free from GMO, trans fat, artificial colouring and cholesterol. It is made from 100% imported sweet potatoes

Exhibited at Thaifex and SIAL Paris 2016 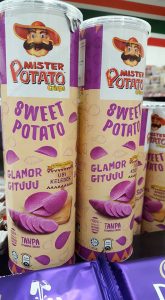 The Mister Potato Sweet Potato is available at 7-Eleven at a price of RM 6.30 (USD 1.50), the same price as the other Mister Potato range made from potato. The sweet potato crisp is manufactured in Malaysia. The key ingredients are purple sweet potato powder, dehydrated potato flakes and tapioca starch.

Tong Garden’s NOI range is the closest competitor but it is in the form of a stick in pouch and not in a canister.

Tan Heng Hong - 5th October 2016 0
Mamee Double-Decker previously said it would introduce biscuit, which will mark the diversification of the company into a new category. True to its word,...

Tan Heng Hong - 23rd September 2017 0
The Singapore's Health Promotion Board is working hard to ensure Singaporeans choose the healthier choice. To promote healthy eating, the health board has launched...

PUC and Smuzcity Roll Out JDX Presto Concept Store on 12.122