Abbott Nutrition Malaysia launched the new Raya campaign with the introduction of a new honey flavoured PediaSure Complete. The milk powder provides complete nutrition for children age 1-10 years to help catch up on growth. The choice of honey ties in well with the food and eating habits recommended by Prophet Muhammad (saw).

Similar to last year, Abbott is celebrating the holy month of Ramadan by training young Muslim children from as early as six years old to take sahur or “pre-dawn meal.” Sahur refers to the meal consumed early in the morning by Muslims before fasting. A contest was launched to encourage children to have a glass of PediaSure for a nutritious sahur. From 27 May 2017 to 22 June 2017, RM 500 will be given to two lucky winners every week for the interesting video of children doing the sahur with PediaSure. 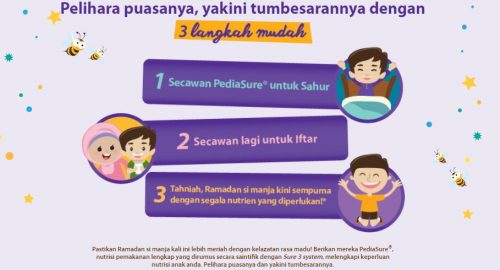 The three-step for complete growth during fasting for children is to have a glass of PediaSure during the pre-dawn meal and another glass during iftar or the meal eaten by Muslims after sunset during Ramadan.

The collaboration with Imam Muda Asyraf (Muhammad Asyraf Mohd Ridzuan), the winner of a reality program in search of a religious role model, continues during the 2017 Ramadan campaign. During this year’s campaign, readers can follow the diary of how Asyraf trains his child to take sahur during Ramadan. The message of Abbott’s Ramadan campaign is simple – strengthening PeadiaSure Complete as the top of the mind for parents who are giving their children a complete meal during sahur or iftar in the fasting month.

Abbott has launched its new Ensure Gold with HMB

Tan Heng Hong - 4th June 2022 0
Garan Tea is a new sugar-free RTD tea that has been recently launched in Indonesia by the country's leading food and drink manufacturer OT...

Reaching Out to Orang Asli