Indofood, Indonesia’s biggest food processing company and one of the world’s largest instant noodle producers, has recently made available instant noodle cups in Malaysia. The new cup packaging adds to its existing range of Indomie instant noodles in packets, which has been around in the country for over 25 years.
Indofood’s Popmie appeared in Malaysia few months ago and were only available in smaller supermarkets and mini markets including at Kiara Supermarket, Hero Supermarket and KK Supermart. Now, Indofood has made available Popmie at larger hypermarket including at Aeon Big in Mid Valley. As for Indofood’s Indomie, I only saw this at Aeon Big in Mid Valley.
The Indomie Instant Cup Noodle flavours include mi goreng (fried noodle) BBQ chicken and satay, while Popmie flavours include soto and chicken. In terms of pricing, both Popmie and Indomie are priced at the middle range.
Source: Mini Me Insights store check at Mid Valley Aeon Big, 4 May 2014
Apart from the flavour, there is nothing to differentiate Indomie and Popmie from other instant cup noodles. For Popmie, the packaging seems to have the styrofoam texture, making it appears as a health hazard. 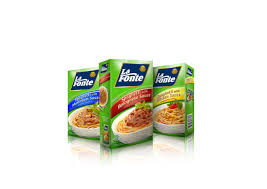 Rather than competing head on in a crowded market, Indofood has a great product La Fonte that can fill the gap in instant spaghetti and macaroni in Malaysia. There is no such product, as far as I am aware, in Malaysia. Cooking the spaghetti is similar to preparing the instant noodle. Just cook for 3-4 minutes in hot water and then pour the sauce, which is in a separate pack. The finish product is tasty. So this is a food for thought for Indofood when it is looking at exporting which product overseas.

Coway Malaysia’s ‘We Stand As One’ Campaign Brings Together Malaysians To...