Here is a close up look of the 275ml Rio cocktail, which has an ABV of 3.8%. The bottle design is really attractive and is clearly aimed at the young female market.

Ready-to-drink cocktail has seen huge success in attracting young Chinese consumers who prefer something more sober than baijiu, which often have a 50% ABV, and sweeter than other alcoholic drinks such as beer. Industry sources said China’s cocktail market has maintained a 30% annual growth between 2009 and 2013 and is set to reach CNY 4 billion (USD 647 million) in 2014, reported China Daily.

Rio is made by Shanghai Bakesi Wine Co., Ltd. (上海巴克斯酒业有限公司). The company is now fully owned by Shanghai-listed Shanghai Bairun Flavor & Fragrance Co., Ltd. Bairun formed the joint venture in 2003 holding a 60% stake but subsequently disposed its entire stake in Bakesi Wine to the other joint venture partners. In 2014, Bairun bought back the company to capitalise on the ready-to-drink beverage sector.

Bakesi Wine has witnessed spectacular growth over the past few years. Clearly, the company still has some leg, which makes the company with a price tag of CNY 5.5 billion (USD 939 million) a worthwhile investment for Bairun. Rio is currently the top cocktail by market share in China. The other competitors are Barcadi Breezer and Red Square (红广场). 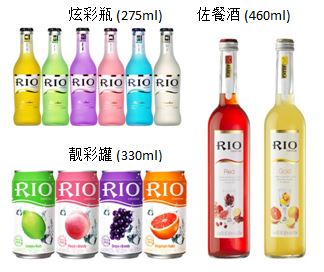 Tan Heng Hong - 3rd May 2020 0
The temporary closure* of all bubble tea shops in Singapore to curb the spread of COVID-19 has opened up the opportunity for RTD bubble milk...

New Mie Kremezz Krezz that can be eaten straight from the...