Coca-Cola Malaysia is going after volume in what is apparently a push towards smaller bottle packaging – 390ml and 1,250ml. The standard sizes are 500ml and 1,500ml. The company first launched the RM 1.00 PET bottle 390ml Coke in the sundry shop channel at the end of 2014. Now, the value RM 1.00 PET bottle and the RM 2.69 1,250ml PET bottle have become the mainstream variants for Coca-Cola at 99 Speedmart and in smaller store format such as sundry shops. 99 Speedmart opened its 600th outlet in November 2014.

These single-serve value variants are not available in the big-box retailers such as Giant, Tesco and Aeon Big and 7-Eleven convenience stores. Pepsi is selling the usual 500ml and 1,500ml variants at 99 Speedmart at a higher price points. 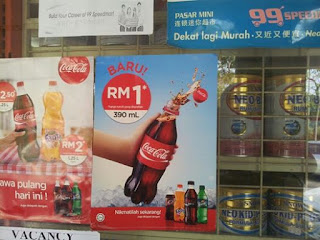 Coca-Cola is using the 390ml, single-serve pack to drive volume sales. The carbonated soft drink market is all about volume. In Indonesia, AJE Big Cola has not adjusted its price for 5 years maintaining it at IDR 3,000. The 390ml pack is cheaper on a per litre basis compared with the usual 500ml variant. The affordable price, RM 1.00, encourages impulse purchase thus higher purchase frequency. 99 Speedmart’s Near ‘n Save strategy means it is the ideal channel to promote the smaller volume single-serve bottle. The neighborhood grocer is popular with migrant workers and nearby residents for top-up shopping.

Smaller size bottle or single-serve pack is a continuation of a trend seen in other regional markets. In the Philippines, the 300ml Mismo has replaced the affordable glass bottle as the preferred choice by street vendors and sari-sari stores.

Coca-Cola Malaysia’s volume strategy will likely pay off in the competition for volume market share, thanks to the highly appealing prices. The dual channel strategy also works targeting consumers with different purchasing power. The more expensive products are sold trough convenience stores and large retailers, while the affordable, smaller variants are available through sundry stores and minimarts.

Coca-Cola with Coffee goes to the Philippines via Ministop