Greenfield Milk, which has high hopes to double sales in Malaysia to 2mn litres of milk worth RM18 million by the end of 2015, has apparently run out of fresh milk quota. As a result, its milk is currently not available in the country. Greenfield Milk entered the Malaysian market in October 2013.

Here is the official explanation given to a reader on the Greenfield Milk official Facebook site. 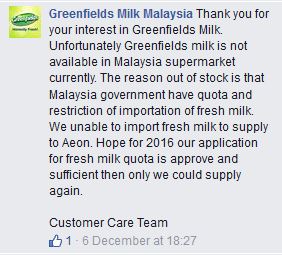 The 2 million litre target obviously has to take into account the tariff-rate quota (TRQ) imposed by the Malaysian government from April 2008 on liquid milk with the heading HS 040110, 040120 and 040130. The TRQ is aimed at protecting the local industry from foreign imports.

Here is the TRQ for Most Favoured Nation (MFN): 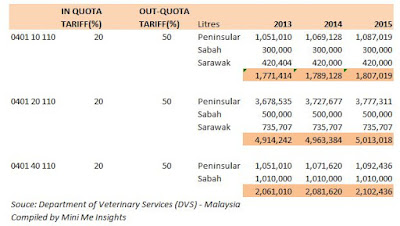 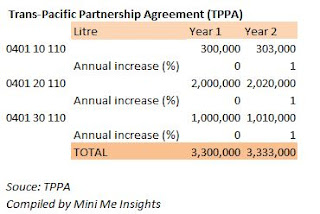 New Zealand has the biggest TRQ allocation under the MNZFTA, which is rightly so as New Zealand is a key source of liquid milk either in retail pack or for processing but this has been surpassed by Australia in the first 10 months of 2015. 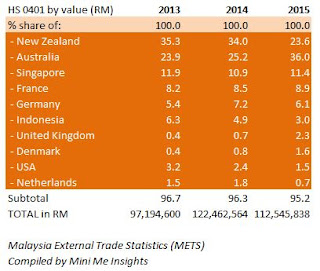 Total liquid milk imported from Indonesia for the first 10 months of 2015 stood at RM 3.4 million, down compared with RM 6 million for the whole of 2014. The lack of TRQ must have impacted liquid milk exports by Greenfield Milk into Malaysia.

Under the TPP, additional 3.3 million litres of liquid milk TRQ have been allocated to TPP signatories for export into Malaysia. The key beneficiaries are TPP members such as the USA and Canada, which do not have existing FTAs with Malaysia. Organic Valley Milk, which used to be available in Malaysia, might have used up its liquid milk allocation for 2015 or exited the market due to unfavorable foreign exchange. With TPP, it is likely more liquid milk from TPP member countries will enrich the Malaysian dairy market scene.

Kuala Lumpur hosts the Largest Gathering of the Coffee Industry to...

De-stress and positively relaxed with TranQuini