Dutch Lady Milk Industries (Dutch Lady) is the leading dairy producer in Malaysia. The company has just announced its 2013 full year results. Below is a summary of the findings: 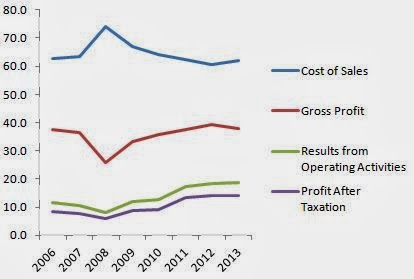 Cost of goods sold (COGS) is rearing its ugly heads again due to the depreciation of ringgit versus the greenback and other major currencies in 2013 and higher raw material costs. The year 2013 also saw the first increase in the share of COGS to total revenue since 2008, rising to 61.95% from 60.70% in 2012. COGS has been on a downtrend since it spiked to 74.02% during the height of the global financial crisis in 2008. Since then, thanks to the strengthening of the ringgit and lower raw material prices, the company was able to steadily improve its gross profit margin.

Back in May 2013, the company already warned that it was “cautiously optimistic, as consumer sentiment has been fairly weak due to the uncertain economic climate.” Moreover, “raw material prices have been very volatile. It is our objective to minimise the price increase to consumers.” The company cited the higher costs due to drought in New Zealand. Well, 2013 turned out to be a year where there was a slowdown in profit growth.
Looking forward to 2014, Dutch Lady said that it “expects the business environment to remain challenging with high dairy raw material prices and foreign exchange pressure.” The share price really took off in the second half of 2011 coinciding with an expected stellar performance in 2011 where net profit surged by 70% over the same period a year ago. Since early 2013, the share price consolidated at the RM 45 to 50 level. At RM 50 a share in late 2012, the PE (2012) stood at 25.9. As of 26 February 2014, the  company was trading at 22.08 times 2013 earnings. The company declared dividend of RM 2.60 per share in 2013, a dividend yield of about 5.4%.
Dutch Lady paid out RM 166.4 million in dividends in 2013, the same as in 2012. As the net income in both years was lower than RM 166.4 million, such high level of dividend payment at 120% of 2013 net income is unlikely to be sustained in the long run. Therefore, the dividend yield may be compressed.
The positive thing about Dutch Lady is that the company has a healthy cash flow as it does not spend much in terms capex to sustain its operation. The company has zero long-term debt and does not depend on debt to finance its expansion. The current liabilities are mainly in the form of trade and other payables.
It is highly likely that growth will be muted in 2014 given the weakness of the local currency and high raw material prices. The share price is expected to consolidate pending improvement in the external environment.

Rival Greenfields Milk with its dairy farms in Indonesia will be a company to watch in 2014. It plans to aggressively expand in the Malaysian market with its fresh milk where it is already has a 30-35% market share in Indonesia. Greenfields may even set up a farm in Malaysia but the main priority is to first build a market in Malaysia. 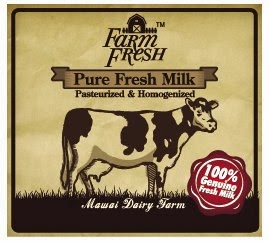 The other significant immediate competitor is local Farm Fresh, which is know for its more modern packaging design. This company has the advantage over Greenfields Milk because it has its own local dairy farms in Malaysia, which gives the company a shorter access to the market .

You Can Now Get The Best Deals With 3 Simple Steps...

Simple Foods offers the wisdom of Chinese medicine with 137 Degrees...