Coconut drink as a category has not been successfully promoted in Malaysia. Coconut is native to Malaysia and fresh coconut is readily available in restaurants and at roadside stalls. Could it be Malaysian consumers have acquired a taste for the real coconut and will not try something rather artificial from the pack?

If you look at Indonesia and the Philippines, coconut is also native to the two countries. One would think there will be no market for ready-to-drink (RTD) coconut juice in can/carton in those markets. If you go to Indonesia, you will likely come across the popular Hydro Coco, which is made by local Kalbe Farma. In the Philippines, you will find Vita Coco, which has just been launched in the country by the US coconut juice maker in cooperation with local Century Pacific Food Inc. Vita Coco is made from Philippine coconuts and retails in a 330ml pack for PHP35 (RM2.56 or USD0.80). 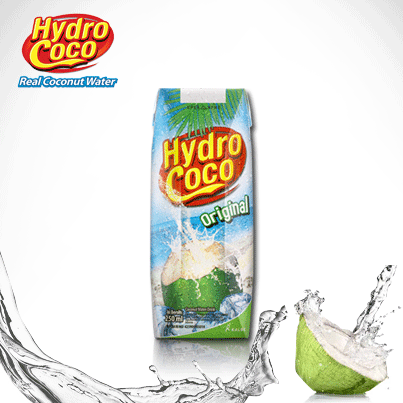 Why is Hydro Coco (formerly Fatigon Hydro) so successful in Indonesia, a nation that is not short of real coconut fruits? The clue can be found in the product tagline “Love Coco, Love Active.” Hydro Coco is positioned as a natural ion replacement drink for those who are active. The active lifestyle marketing is similar to F&N 100Plus, the leader in the Malaysian isotonic drink segment except 100Plus is not a natural drink. The Hydro Coco in the 250ml carton pack also makes it the perfect drink for on-the-go occasion as it is easy to carry around. 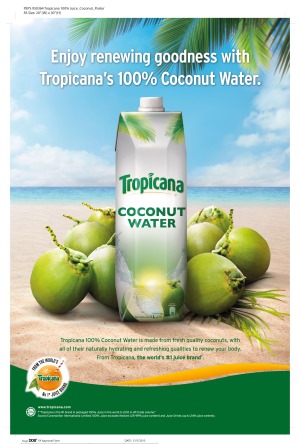 In contrast to the active lifestyle position of Indonesia’s Kalbe Farma Hydro Coco, the coconut water in Malaysia focuses more on the health benefits. Tropicana Coconut Water, launched in early 2014 stresses the “goodness” of coconut water. The product is described in the press as “great pick-me-up on hot days that will help keep you hydrated” in The Star and “beat the blazing heat and stay hydrated with Tropicana Coconut Water; rich in minerals and electrolytes like potassium and magnesium.” in Marketing Magazine Malaysia.

Think for a moment, would you be drinking coconut juice from a 1 litre family pack on a hot day? So, the choice of the family pack is simply wrong. Tropicana should introduce another smaller 250ml pack for on-the-go consumption.

Also, the “goodness” message is a waste of precious marketing budget. Consumers know only the real coconut juice will give them all the nutrients.  The money should be spent on promoting the active lifestyle positioning such as a natural alternative to isotonic drinks to replace all the lost ions.

In order to grow the coconut juice category in Malaysia, you need to have a smaller pack for on-the-go consumption and have a more relevant product positioning such as active lifestyle that is relevant to consumers who already have easy access to the real coconut juice.

Tan Heng Hong - 27th September 2021 0
Thailand's The Original Farm Co., Ltd., the operator of the Japanese restaurant ChouNan, has started selling its meals through a vending machine as the...

Tan Heng Hong - 13th February 2018 0
Co-Ro A/S, one of the world's leading providers of fruit-based soft drinks and concentrates, introduced its Sunquick ready-to-drink (RTD) juices in Myanmar in the second...