The new Alfamart convenience store on Governor’s Drive in Trece Martires City, opened in June 2014, is strategically located on a cross road. This is also one of the stops for buses and jeepneys travelling between Treces and Dasmarinas.

Competing stores in the vicinities include a TGP pharmacy, a Puregold Junior for budget conscious homemakers, a 7-11 and four sari-sari stores – Lyn Store, Markvell Store, Don Miguel Store and Maicy Jud Store – all trying to compete for a share of the consumer traffic.

Price wise, Puregold Junior and Alfamart prices are roughly the same but 7-Eleven is obviously higher. For beverage, the difference can be up to 35% for a can of Mountain Dew in 330ml, making shopping at Alfamart more wallet friendly. 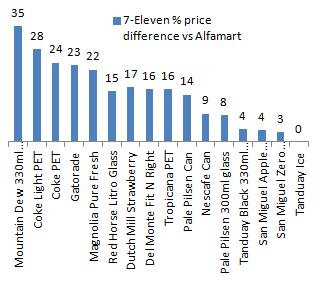 Is low price a major factor driving footfall into a convenience store? The answer is no. A survey on the number of consumers walking into 7-Eleven and Alfamart over a period of one hour from 12pm to 1pm on 10 October 2014 has revealed more chose 7-Eleven. During that period, 38 customers visited 7-Eleven compared to only 8 for Alfamart.

7-Eleven attracted consumers from all walks of life particularly young consumers, a plus point in a country like the Philippines where 52.7% of the 107 million population is below the age of 24. The picture below taken inside the 7-Eleven tells it all. 7-Eleven is the happening place for young school going children because of the wide variety of products offered including ready meals, ice cream, glossy magazines, snacks and beverages. The arrangement of the seating area makes 7-Eleven the place to hang out with friends or to rest after a hard day at work.

In contrast, the new Alfamart store in the Philippines is arranged more like a minimarket modelled after the Alfamart in Indonesia. The products are geared towards consumers with a family. These products are usually sold in large family packs and they include detergent, baby care, baby food, edible oil, chilled chicken, chilled meat and hot dog, and dairy including margarine, butter and probiotic drink.

The bad news for this particular Alfamart store is it is located within a 3min walking distance from Puregold Junior. Puregold Junior offers more varieties of products, making it a place for one-stop destination for grocery shopping. Moreover, Puregold is synonymous with affordable prices, which adds to its allure.

Alfamart is not a convenience store per se. I would argue it is more like a minimart and will never compete with the “happening” 7-Eleven or FamilyMart. In order to survive, Alfamart should target ‘top-up trip’ in residential neighborhoods out of reach of large supermarkets in areas with a large concentration of sari-sari stores.

Tan Heng Hong - 18th May 2022 0
In celebration of 501® Day, Levi’s crosses borders and embraces the South East Asian creative spirit with its one of a kind Travelling 501® Next...

Tan Heng Hong - 11th July 2020 0
Thailand's CP Foods has launched Veg It Up!, its latest microweavable soup. The soup is available in corn and pumpkin and is selling at...

Got Your Jab? Get Your Discount from The Coffee Bean &...

Goodday Milk Embarks on a Mission to create awareness and educate...