Dengue is a dreaded disease in the tropics. Consumers in Malaysia and Indonesia have their own remedies to treat dengue including using isotonic drinks to replace lost fluid. In Malaysia, isotonic beverage makers are careful not to actively or overly promote the use of isotonic drink to hydrate dengue patients. This comes as it is already a common practice by family members to supply isotonic drinks to loved ones down with dengue. Brands also fear such move might infringe on existing regulations.

It is another case in Indonesia where Amerta Indah Otsuka, the producer of Pocari Sweat isotonic drink, has been emphasising the message of hydration for dengue patients for several years.

On the Q&A section of the website of Amerta Indah Otsuka, the company has ruled out Pocari Sweat can cure dengue (demam berdarah dengue – DBD). However, it does mention the beverage can replace lost fluid citing World Health Organisation’s (WHO) recommendation to dengue patients to take isotonic drink with ion.

Collaborates with government and health experts

The company has been strengthening the message of hydration for dengue patients by organising a series of official events involving health experts and the government.

In early 2016, Amerta Indah Otsuka organised a seminar entitled “hydration therapy with ion for dengue patients.” The event in Yogyakarta was supported by the Health Department of Yogyakarta and attended by community health clinic doctors. The commercial features the tropical disease expert Dr. Leonard Nainggolan, who has participated in earlier events organised by Amerta Indah Otsuka, explaining the importance of hydration for dengue patients. 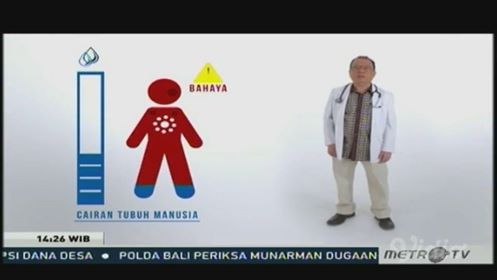 He is seen pouring the content from a bottle bearing a logo closely resembling Pocari Sweat. Tiny icons with the word ‘ion’ accompany the content that is being poured out. The figure next to the glass symbolises the dengue patient who is now getting hydrated from the isotonic drink.

With the eradication of dengue far from complete due to the lack of a permanent cure, some brands are stepping up the effort to show that they can actually help. In the case of Indonesia, Pocari Sweat has successfully positioned itself as the isotonic drink with ion suitable to hydrate dengue patients. Such initiative is done with the full support of the government.