PT Sumber Alfaria Trijaya Tbk, the operator of Alfamart minimart in Indonesia, has announced in early 2014 of  a plan to expand into the Philippines. The first outlet could open as early as in the first quarter of 2014, said Alfaria vice president director Pudjianto. Sumber Alfaria Trijaya is a minority shareholder with a 35% stake in the new unit Alfamart Trading Philipines. 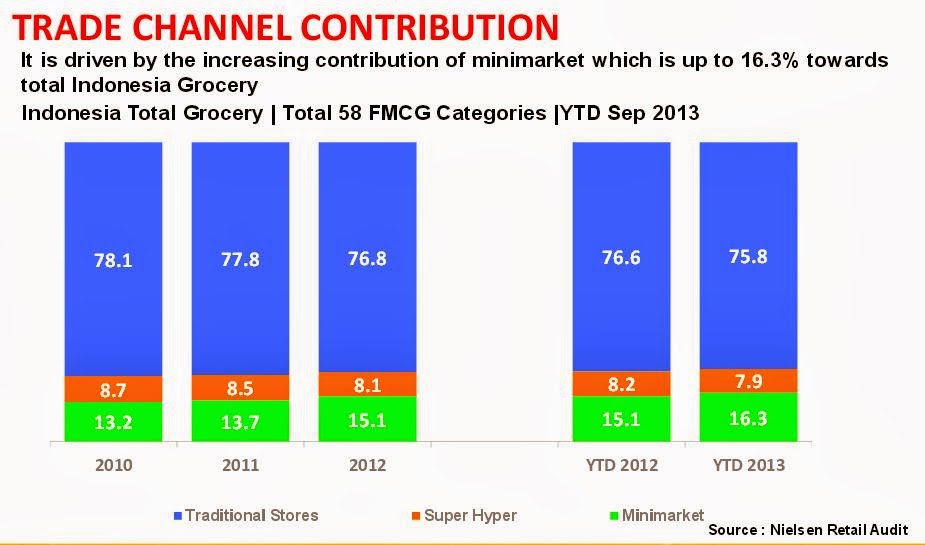 The minimart has been the most successful store format in Indonesia with growth outpacing other modern retail formats such as supermarket and hypemarket. With an average selling area of 90 square metres and about 4,000 SKUs, a typical Alfamart store is an oasis for shoppers to escape the oppressive heat and rain. Each Alfamart store has air conditioning, carries all the most essential food and non-food items with prices half way between a hypermarket and a convenience store (see the chart below). The store can be found everywhere, thanks to the wide network of stores, reaching 8,096 outlets at the end of September 2013.

Prices of Beverage Products By Format in Jakarta, Indonesia, Oct 2013

Proximity shopping is the preferred way to shop for consumers in both countries, thanks to the worsening traffic congestion. The strategic geographical location of minimart in the neighborhood means it is the place to go for destination or top-up spending for everyday packaged products. The traditional wet market remains the most popular destination for fresh produce.

In the Philippines, convenience store is king in the small modern store format with 7-Eleven dominating with over 1,000 outlets in the country at the end of 2013. However, convenience store products tend to sell at a higher price point than minimart due to the high operating costs of running 24 hour a day. The only strong minimart chains in the Philippines that I am aware of are Mercury Drug and Save More, which are rather pharmacy + minimart hybrid. So, there is a gap for minimart to serve the middle market and Alfamart is in a good position to fill in that role in the Philippines.

Tan Heng Hong - 3rd June 2016 0
Permanis has once again taken ownership of World Milk Day (1 June) for Goodday Milk like what it did for Wonda Coffee with the...

USHER IN THE YEAR OF THE TIGER WITH A FESTIVE REUNION...